Big trees store immense amounts of carbon, protect water, and provide homes for animals. Experts tell us that just 3% of the trees hold 42% of the carbon in the forest.

Tell your representatives to protect the best of what’s left in Oregon’s forests. Our biggest and oldest trees provide critical habitat for wildlife, store carbon, and are resilient to wildfire.

Big trees make up only 3% of our forests

Let’s protect them, not cut them down. The Eastside Screens and the 21″ rule are the bedrock that have protected big, old growth trees from logging for over two decades.

The new administration has promised to listen to the public and the top scientists. If they mean it, they will withdraw this decision to remove protections on big trees in Eastern Oregon.

Ask Oregon’s senators to work with the Biden administration to protect big trees, wildlife and water. 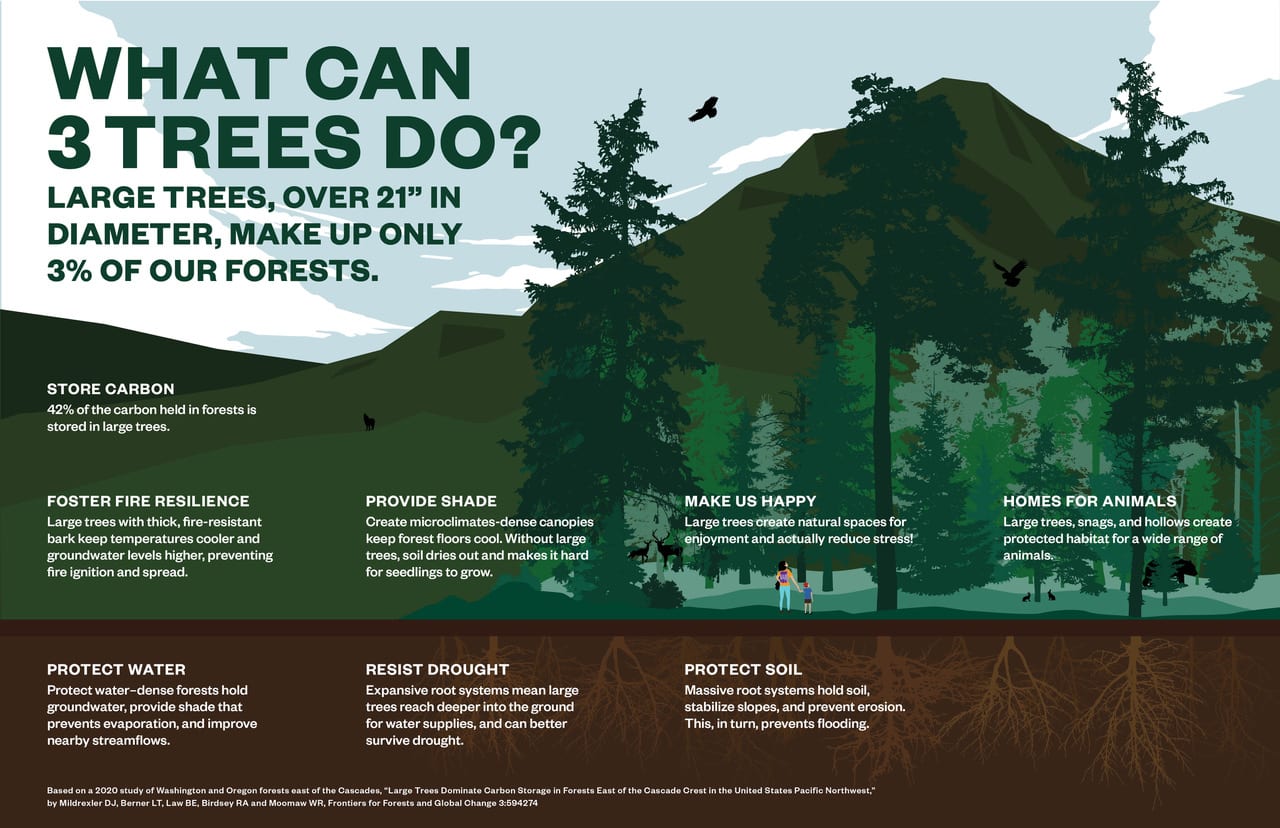 Why restore protections for the big trees?

You can help restore protections for big trees, old growth forests, wildlife and water on over 9 million acres of public lands in Oregon and Washington.  Join with over 100 independent expert scientists, local residents, and native tribes who opposed the rollback.

The Trump administration ignored science. They ignored the public. They revoked forest protections across Oregon in the eleventh hour. We can change course.

Let your representatives know we need protections for old growth and big trees in Eastern Oregon.

Old growth trees have what it takes to survive wildfire

They create shade that keeps forests cooler and wetter.

To reduce the spread of wind and drought-driven wildfires, we need to focus our efforts near homes and communities.  Cutting down big, old trees deep in the forest puts us more at risk from fire.

“New federal guidelines allow cutting large trees that have been off-limits to logging for nearly three decades across 8 million acres of Eastern Oregon.”

In Eastern Oregon, the largest trees provide key habitats for our wildlife. The pygmy nuthatch, white-headed woodpecker, pileated woodpecker, the Pacific fisher, great grey owls, Northern Goshawk and many more animals rely on these trees. These big trees are just 3% of the forest and essential for wildlife.

Ask the new administration to listen to science and the public — withdraw the decision and protect big, old fire-resistant trees in Oregon.