That’s why numerous communities across the state have decided to protect their forested watersheds from industrial logging. Millions of Oregonians get their drinking water from rivers and streams originating in Oregon’s forests, many communities remain vulnerable to industrial logging’s impacts on water quality and quantity.

In addition to acting as natural reservoirs for people, intact forests also provide critical habitat for salmon, which need cold, clean water all year round to survive. For millennia, salmon have shaped the diets, spiritual identities, and cultural practices of indigenous peoples throughout the Pacific Northwest.

Today, coastal communities continue to rely on stable salmon fisheries as part of a healthy economy. Improving forest practices can help recover salmon runs and ensure that a way of life on the Oregon Coast persists.

Many other industries that are central to Oregon’s economy – such as agriculture and tourism – depend on abundant clean water and healthy watersheds. Strengthening protections for our forested watersheds will help ensure that these industries thrive in the decades to come. 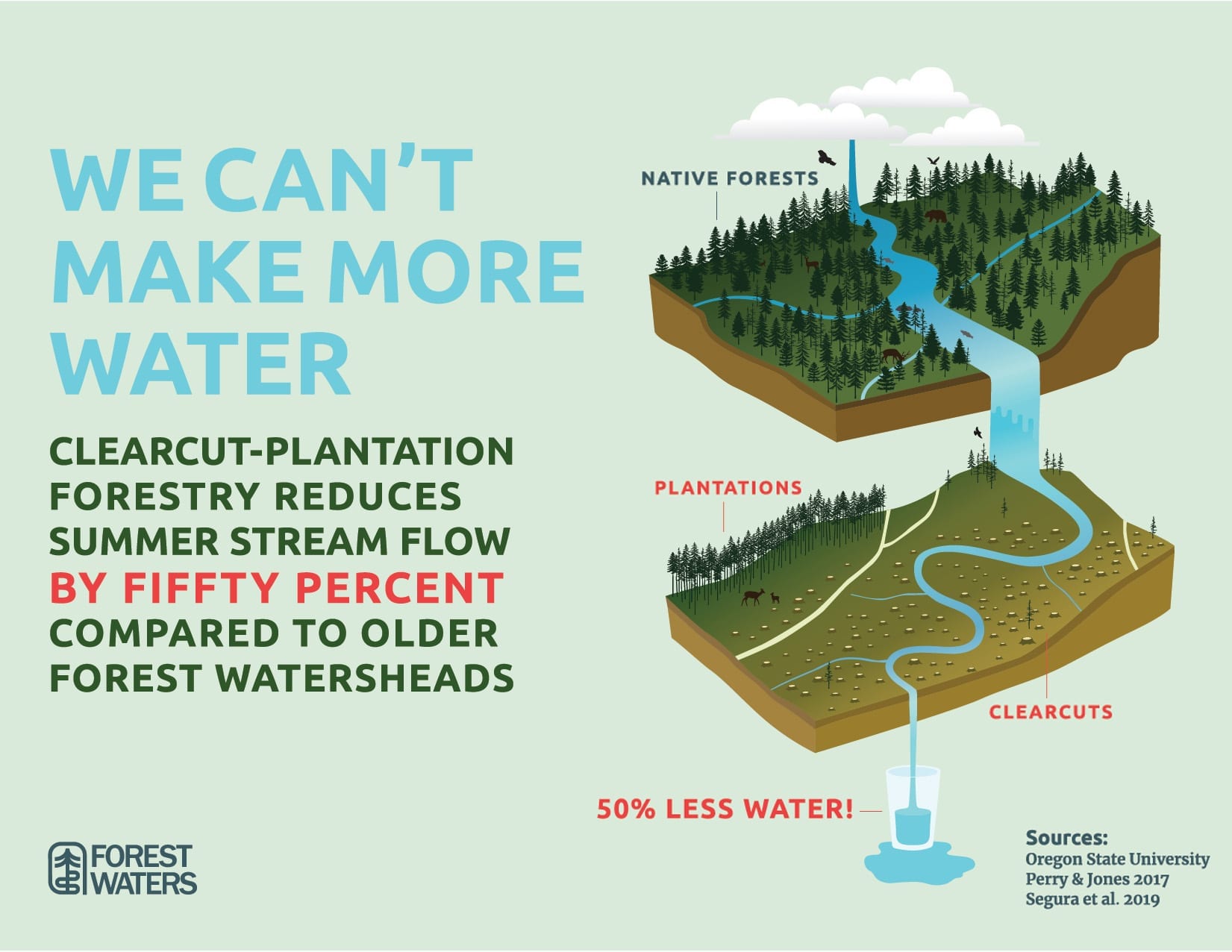 Clearout-plantation forestry harms watersheds in a variety of ways. Perhaps most notably, this aggressive model of forestry leads to dramatic reductions in water supplies during dry months – when communities, farmers, and salmon need it most.

Oregon State University scientists have found that industrial logging can reduce water levels during summer months by 50% when compared to adjacent watersheds with older trees. Another study published by OSU researchers in June 2020 arrived at a similar conclusion, funding that industrial forestry diminished summer water levels by half – and these reductions in water supplies lasted for more than 50 years.

Protecting our forested watersheds is especially important in the era of climate change, which is already contributing to water shortages and summer droughts throughout Oregon. Intact forests provide a natural system for slowing run-off in the winter and gradually releasing water throughout the summer. A warming climate and more volatile weather patterns require Oregon to adopt stronger logging laws to better protect our drinking water supplies.

“Forests provide excellent water supplies, the city has relied on that for almost a hundred years. All of the sudden we can’t drink the water, what is going on?” -Tina Schwickert, former Water Resources Coordinator, Salem Public Works

Clearcut-plantation forestry also leads to more floods and landslides, which pollute drinking water and degrade salmon habitat. For many decades, scientists have carefully tracked and documented a direct correlation between clearcuts and flooding. Climate change only exacerbates this trend by contributing to more rain and less snow during winter months.

Oregon law currently allows clearcut logging on hazardous steep slopes, which contributes to high levels of landslides in the Oregon Coast Range and elsewhere around the state. In neighboring states of Washington and California, clearcuts are prohibited on steep slopes and in unstable areas. Over the past few decades, we have spent billions of taxpayer dollars to restore salmon habitat and watershed health in Oregon; however, the efficacy of this restoration work is greatly undermined by ongoing habitat degradation allowed under Oregon’s weak logging laws.

Oregon’s logging laws allow corporations to clearcut vast areas, cutting right across steep mountain slopes and year-round streams. After logging, timber companies spray pesticides from the air to kill native trees and shrubs, which can end up in our water – endangering the health and safety of rural Oregonians. Our neighbors in Washington and California have developed far stronger logging laws to protect water quality, preserve fish and wildlife habitat, and reduce the risks of landslides. Oregon has a lot of catching up to do.

Alternatives to the Industrial Model

Oregon’s intact forests provide our communities with abundant clean water all year round, and therefore we must do all we can to better protect our forests for future generations. By limiting logging on steep and unstable slopes and increasing the amount of trees left after logging, we can safeguard our communities, recover salmon populations, and protect our drinking water from flood and landslide hazards.

Check out the Sustainable Forestry page to learn more about alternatives to industrial logging.